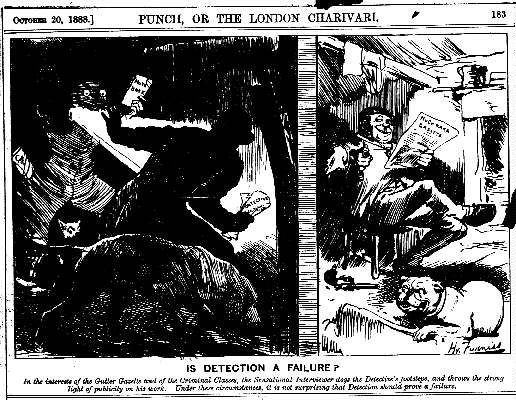 THE attack on Sir CHARLES WARREN. Those who join in bloodhounding him down must be interested in renewing the scenes of riot and disorder in Trafalgar Square with which Sir CHARLES dealt most effectively. The Police Force requires strengthening, and Sir CHARLES is perfectly alive to the fact. What on earth can it matter if, in number, our Police compare favourably with the Police force of Constantinople, or St. Petersburgh, or Vienna, or Jericho, if we have not sufficient Police to protect life and property in the Metropolis? The London may say,--

"Why care I what force there be
In Jerusalum or Amerikee,
If there aren't enough for me
in London?"

Socialistic sensational Journalists and rowdy demagogues would like to see the Police Force reduced to one in every two thousand, until they fell to fighting among themselves, when they would be the first to yell out "Police!" and scream for teh intervention of the enfeebled arm of the law.

(A Page from a Diary kept in the Neighbourhood of Whitehall.)

8 A.M.--Up early to visit Hyde Park, where I want to test the value of some bloodhounds as applied to the discovery of crime. Make the acquaintance of two full-grown brutes, who examine my boots with suspicion. I am glad on the whole that they are under restraint. It is suggested that they should hunt me. Cannot very wel refuse, but would far rather have left that sort of thing to an Assistant-Commissioner. However, not to be done. Half of them recently resigned, remainder (lazy people!) no doubt still comfortable in bed. Never can teach my subordinates the value of early rising!

9 A.M.--Just reached the Powder Magazine. Had to run for my life. For the moment have distanced the bloodhounds. Inspected the sentry, and got him to give me over his orders. Quite right; no smoking to be allowed within ten yards of the gunpowder--very proper precaution. A careless smoker, throwing away a lighted lucifer, might set the place on fire. Bricks and stones ignite so very easily. Obliged to be off again at the double, as I can hear the snarls of the bloodhounds, who are once more on my track. Hope they will spend a few minutes with the sentry before they follow me.

10 A.M.--Brutes still pursuing me. Concealed myself in the Park-keeper's Lodge, and was nearly arrested on suspicion of being a distant relative of "Leather Apron." That's the worst of offering a reward! It causes so many innocent people to be taken up for nothing. No time for more. Just square Park-keeper, and am off again. Trust the brutes will have a bad quarter of an hour with the custodian of the gardens before they resume their pursuit of me.

11 A.M.--Just escaped. Not a moment too soon. Hadn't reached the Marble Arch a minute before the hounds sighted me, and made for my boots. Only time to jump into a Hansom, and drive to my Club.

12, Noon.--Finished my lunch and enjoying a few minutes' rest in the smoking-room. Early edition (2nd) of the evening newspapers, just arrived. Why won't they leave me alone? Several suggestions that I should resign. Half a mind to--would if those borrid beasts, who I can hear barking outside, would only understand that I had given up the Police. Committee just sent polite note, presenting their compliments, and calling my attention to the rule forbidding the admission of dogs into the Club-house. Appears that the bloodhounds have rushed into the hall and eaten my hat and umbrella. Committee are under the impression that the hounds belong to me!

1 P.M.--Occupying my room in Whitehall Place. Got away from the Club, without my hat and umbrella, by a back entrance. Will give strict orders that I am not to be disturbed. Have called down the tube, and can get no answer. Have just remembered that I have sent the entire Staff (disguised as washerwomen) to Whitechapel, to look about them. Don't much like to be alone with those brutes on my track.

2 P.M.--Just as I expected! They have traced me, and I can hear them on the staircase. Wish I had a revolver. Great nuisance that the lock of my door is out of repair. They are sure to come in! As I am a man of ready resource, have hidden myself on a shelf over a water-bottle. Have always heard that water destroys the scent. I can hear the bloodhounds sniffing outside! Most annoying to be all alone. Wish I was back at the Soudan!

3 P.M.--Have been for the last hour on the shelf. The dogs have made my room their own. Have watched them from under a pile of newspapers. Fortunately, they have preferred devouring my despatches to searching for me. Boy just brought in my tea. Before I could speak to him they had begun to hunt him! For a moment I am alone.

4 P.M.--Back again on my shelf. The intelligent beasts (far too intelligent!) after disposing of the tea and muffin-boy, have returned to hunt me. I am safe for the moment, as they are devouring my cocked hat, sword, and top-boots. A great nuisance as they (the cocked hat, &c.), form an effective portion of my favourite costume. Cat's meat man outside. Can hear his cry. The bloodhounds have heard it too, and have disappeared to hunt him. Saved for the present!

5 P.M.--Brutes back again. They have discovered me! I am keeping them off with a poker and a bag of biscuits. My shouts should be heard. Really, these people obey my orders too literally. When I said that everybody was to be off to Whitechapel, I did not mean, of course, that Whitehall Place was to be deserted. Wish I could induce the bloodhounds to go opposite to pay a visit to the Commissioners in Lunacy. Not that they would find them (as they are always from town inspecting outlying asylums), but they might have a little fun with the Secretary, who is a fixture.

6 P.M.--Still on my shelf. The bloodhounds are engaged at this moment in eating some dog-muzzles and my box of decorations. And now they are ready for a spring! Well, I will make a good fight of it!

7 P.M.--Saved! Six perfect strangers have rushed into the room. The brutes are seized and handed over to the proprietor. The bloodhounds in handcuffs (applied to their legs) are now being carried off in triumph. Very grateful to my rescuers. It appears that the six perfect strangers are prisoners who have been arrested on suspicion. As they have done me such a signal service, I can but release them. I have less compunction in giving them their freedom, as I find that they have all been staying for the last three months in a boarding-house at Margate. From this I fancy it is improbable that they could have been concerned in the sad affair at Whitechapel.

8 P.M.--The staff of the office have just come back. They have returned, having arrested, by mistake, one another. This is most satisfactory, as it is proof that they must have been admirably disguised. Am on the eve of leaving the office for home, having just issued an order that the use of bloodhounds by the Police will be suspended until further orders.