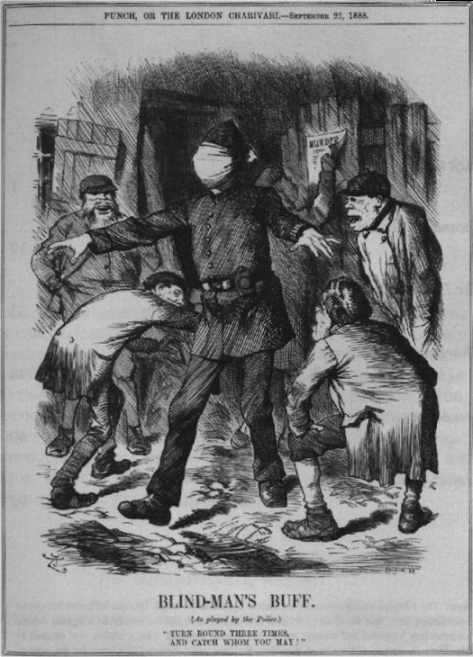 A STRANGE mad game to play in such a place!
The monster City's maze, whose paths to trace
Might tax another Theseus, the resort
Of worse than Minotaurs, for blindful sport
Would seem the most unfitting of all scenes;
What is it there such solemn fooling means?

Means? Ask purblind Municipal Muddledom
The true significance of the City Slum.
Ask, but expect no answer more exact
Than blundering palterers with truth and fact
Range in their pigeon-holes in order neat,
The awkward questionings of sense to meet,
And, meeting, blandly baffle. Lurking crime
Haunts from of old these dens of darksome slime.
There, where well-armed Authority fears to tread,
Murder and outrage rear audacious head,
Unscanned, untracked. As the swift-sliding snake
Slips to the covert of the swamp's foul brake,
Fearless of following where no foot may find
Firm resting, where the foetid fumes that blind,
The reeking mists that palsy, guard its lair;
So Crime sneaks to the Slum's seclusion. There
Revealing light, the foe of all things ill,
With no intrusive ray floods in to fill
Those hideous alleys, and those noisome nooks,
With health and safety. Flush with limpid brooks
The slime-fouled gutters of the Ghetto, drive
Plinlimmon's breeze through Labour's choking hive,
But let not light into the loathsome den
Where hags called women, ghouls in guise of men
Live on death-dealing, feed a loathly life,
On the chance profits of the furtive knife.
The robber's mountain haunt, the outlaw's cave,
Guarded by rocks or sheltered by the wave
From feet intrusive, furnish no such lair
For desperate villany or dull dispair,
As this obscene Alsatia of the slums.
Town's carrion-hordes flock hither; hither comes
The haggard harpy of the pavement, she
The victim's victim, whose delirious glee
Makes mirth a crackling horror; hither slink
The waifs of passion and the wrecks of drink.
Multiform wretchedness in rags and grime,
Hopeless of good and ripe for every crime;
A seething mass of misery and vice,
These grim but secret-guarding haunts entice.
Look at these walls; they reek with dirt and damp,
But in their shadows crouched the homeless tramp
May huddle undisturbed the black night through.
Those narrow winding courts--in thought--pursue.
No light there breaks upon the bludgeoned wife,
No flash of day arrests the lifted knife,
There shrieks arouse not, nor do groans affright.
These are but normal noises of the night
In this obscure Gehenna. Must it be
That the black slum shall furnish sanctuary
To all light-shunning creatures of the slime,
Vermine of vice, carnivora of crime?
Must it be here that Mammon finds its tilth,
And harvests gold from haunts of festering filth?
How long? The voice of sense seems stricken dumb,
What time the sordid Spectre of the Slum,
Ruthless red-handed Murder sways the scene,
Mocking of glance, and merciless of mien.
Mocking? Ah, yes! At Law the ghoul may laugh,
The sword is here as harmless as the staff
Of crippled age; its sleuthhounds are at fault,
Justice appears not only blind but halt.
It seems to play a merely blinkered game,
Blundering about without a settled aim.
Like boys at Blind-Man's Buff. A pretty sport
For Law's sworn guards in rascaldom's resort!
The bland official formula to-day
Seems borrowed from the tag of Nursery play,
"Turn round three times," upon no settled plan,
Flounder and fumble, and "catch whom you can!"