An East End Vicar and his Work
Written circa 1895 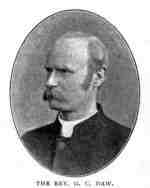 Although a Londoner born and bred I am bound to confess that I was in painful ignorance of the precise locality of Spital Square until I had occasion to pay a visit to the Vicar of St. Mary’s, the Rev. G. C. Daw. It is, therefore, not improbable that many of my readers may be in a similar position, and it will be well to state at once where it is and who are the people who dwell there.

Spital Square itself, as the street is called, is a turning out of Bishopsgate Street, and almost within sight, on the opposite side of the way, of the Liverpool Street Station extension, the terminus of the G. E. R. But the parish of St. Mary, Spital Square is, of course, of much wider extent. It includes two ancient "liberties," viz., those of Norton Folgate and of the Old Artillery Ground. These names call up some very interesting historical associations ; but, as I ventured to remark to the good Vicar when I was chatting with him in his study one evening at the close of a long day’s work, history is at a discount in a utilitarian age like the present, and it will be more to our purpose if we try to picture the parish as it is.

"You have some fine houses," I observed to the Vicar, "in Spital Square I thought yours was an East-end parish."

"So it is," he responded; "you have seen the best of it the way you came in, but it will not be my fault if you don’t see some of the worst of it as you go out. Yet even in Spital Square the houses are not tenanted as they once were. For the most part they are now let out in tenements, whereas a generation or so ago they were all occupied by good families, and one of them was a favourite resort of an English Sovereign."

"But that was before the days of piano-organs," I interposed, with a sly reference to one of those nuisances which I had noticed in full operation as I passed along, with a dozen or so boys and girls dancing round it.

" It was," the Vicar rejoined ; "but you must not speak disparagingly of our only aristocratic quarter. As I said, we have a history, and we are proud of it. Do you not know that this parish was the home of the silk-weaving industry, and some of the best Spitalfields work was turned out from the looms here?"

"I do not doubt it," I replied. "But that must have been long ago."

"Well, yes, it was," the Vicar sighed; " we have nothing of the sort here now. The weavers are all gone, and with them the old glory of the place has departed. We have one or two silk factories in the parish, but they are quite modern ; and factory life at the East-end of London, even under the best conditions, is not what we should like it to be. You asked me what class our people belong to. We have a good number of factory hands, and of respectable artisans, but we have still more of the lower classes, such as market porters, dock labourers, costermongers, and the like. Our best people dwell in the Norton Folgate part of the parish; but even there we have a few courts. The Old Artillery Ground, however, is now quite a poor district. The streets are small, and the houses in them are nearly all let out in single rooms, while the courts show a still lower order of things. Single rooms are a special feature of this part, and frequently we find a whole family huddled together in one room, the rent of which ranges from 2s. 6l. to 3s. 6d. a week."

"This must represent a very sad state of things," I said. 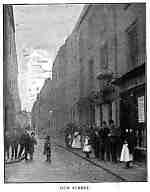 "Yes it does," the Vicar sorrowfully replied ; "but," he immediately added hopefully, "our people are respectable, and there is very little immorality. Speaking generally, family life is held sacred here just as anywhere else. Our people are poor - some of them very poor - but our work amongst them is full of encouragement. If I were asked to describe the position here, I should at once say it was a decidedly hopeful parish."

"You are not a stranger to East-end work?" I asked.

"Oh, no," Mr. Daw replied. "As a layman it was my privilege to work as a voluntary helper under the present Bishop of Bedford, Dr. Billing, when he was Rector of Christ Church, Spitalfields. Then in 1891 I was ordained, and my first and only curacy was with the Rev. E. A. B. Sanders, at Whitechapel Parish Church. I think, then, that I may claim to know something of the East-end, and I say that the work here is distinctly hopeful and encouraging. Of course our parish is smaller than either Spitalfields or Whitechapel. But we have 5,000 people, and many of these are Jews."

"Are you making any special efforts to seek these sons of Abraham?" 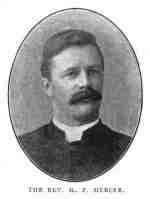 "Not at present; but I have plans in my mind which I hope may soon take shape. My work as Vice-Principal of the London Jews' Society College at Palestine Place - a post I held for ten years - has given me a keen interest in the welfare of the Jewish people, and it will be a great joy to me if I am permitted to bring some of my Hebrew parishioners to a knowledge of the Lord Jesus as the true Messiah. But special work of this kind requires time for its development, and as I have been here but little more than eighteen months I have had to spend much of the time in building up parochial machinery and organising the general work of the parish. My predecessor was a most devoted and saintly man, but he was left here too long, and with the growth of years his earlier energies naturally fell off. My desire has been to get hold of young people ; I don't mean children only, but young men and young women, and I am much cheered by the results that have attended our efforts. I say 'our' because it would be quite impossible for any man single-handed to make an impression on this parish. Thanks to the C.P.A.S. this parish has enjoyed a grant for some years, and I have been able to have the services of a curate whose work here has been invaluable. I regret to say, however, that the clergyman I refer to, the Rev. H. F. Mercer, has just broken down in health, and I fear that the doctor will not allow him to return to East London work. But the point I want to make is this that the services of a curate in this parish are essential, and that without the help of the C.P.A.S. it would be impossible for that need to be supplied. I must, however, repeat that Mr. Mercer has been a most diligent and active worker. His open-air services in the summer were most successful, and I have reason to believe that they were greatly blessed to many. Then his Bible Class for young men has been a power in the neighbourhood. He also took a deep interest in temperance work, and the Band of Hope has increased quite four-fold since he took it in hand. Another special department of his work has been the Church Lads' Brigade. He managed to get hold of some of the roughest lads of the parish. I am much disappointed that his health does not seem strong enough to bear the strain of an East-End parish. For strain it most certainly is. The visiting alone is enough to try even a strong man. You can imagine what it must be to spend a whole day going from room to room in these narrow courts. But it must be done. I know of no work more important than that of visiting the people in their homes. It gives us an influence over them that we cannot acquire in any other way. And it is most hopeful work here. I find it far less difficult than I did in Whitechapel. I can get into every room without the least hindrance, and I have never once been refused."

Mr. Daw then suggested that we should have a look round the parish. It was getting late and I feared that there would not be much to see. "Oh, we are late people in these parts," he observed, and so it proved.

The light was still burning in the school room (St. Mary's is one of those parishes which, in spite of their poverty, are gallantly maintaining their voluntary schools), and we looked in. There, in one of the upper rooms, was the Mothers' Meeting just coming to a close. It seemed a strange time for such a gathering, but the women there assembled could not come at an earlier hour, for many of them had been at work all day. 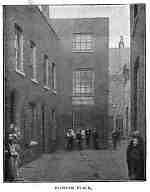 From the schoolroom we passed into the church. It has lately been renovated and one could not but be struck by its bright and cheerful appearance. The walls and front of the galleries have been decorated in art colours, and the old-fashioned, high-back pews have given place to wide open benches. The Vicar has done well to make his church as bright and clean as possible, for there is too much that is dismal and dirty in the immediate neighbourhood. Asked about the congregations, he readily responded that they were increasing every week. When he first went there the church was but very sparsely attended, but the work in the parish is having its effect, and there seems reason to hope that before long the church will be comfortably full, at least at the evening service. The Vicar has secured grants from the S.P.C.K. and other Societies, and by these means is able to put a Bible, a Prayer-Book, and a Hymn-Book into the hands of every one who comes into church. He uses the "Numbered Prayer-Book," and as the service proceeds announces the pages at which the different parts will be found - the necessity for which is highly significant of the class of people attending the church.

Before bidding me good-night the Vicar piloted me through some of the smaller streets and courts of his parish. I found that they corresponded in every respect to his description of them - dark, dirty, and overcrowded - and I could well appreciate the force of what he said in reference to the trying character of a day's hard visiting in this neighbourhood. But there is light in the darkness, and one rejoices to know that the light is spreading. It is in such a field as this that the C.P.A.S. finds congenial soil, and its work there may, by God's blessing, be the means of turning a wilderness into a garden of the Lord.