To Check the Survival of the Unfit:
A New Scheme by the Rev. Osborne Jay, a Militant Bethnal Green Parson, for Sending the Submerged to a Penal Settlement.
From: "The London", 12th March 1896

[The "wretched tenements" referred to below were in the area known as the Old Nichol. It became famous as the Jago in Arthur Morrison's A Child of the Jago, and it's thought that Morrison may have named it after the Reverend Jay: Jay-go.] 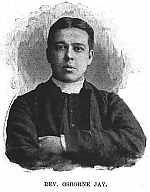 A FEW years ago the wretched tenements which the County Council is now razing to the ground in Bethnal-green harbored the most abandoned characters of London. Crime and immorality ran riot, and what efforts the clergy and police put forward to grapple with the deplorable condition of affairs were of no avail. Nothing remained but to clear the area, and this the County Council has done at a cost of Ł300,000. In the midst of this area however, upon which the new buildings are being erected, stands the Church of Holy Trinity, of which the Rev. Osborne Jay is vicar. It stands where previously existed the worst court in the worst spot in the metropolis. It is a small church capable of seating about 400 people, but has cost Ł20,000. The church has, however, a very handsome interior, and was greatly admired by the late President of the Royal Academy. The chief feature of Holy Trinity is not the fact that it is the only consecrated church in England built on the first floor, nor the fact that it is beautiful, but that in its congregations can be found men who would not attend any other place of worship. The secret is in Mr. Jay. He has used common-sense methods of getting hold of the people. Nine years ago, when he first went into this awful district, he had no church. It was, however, necessary that he should have one of some kind, and after a long search for a suitable building, he utilised a loft over a row of stables. The loft was reached by a kind of ladder, and the children could communicate with the horses below through the holes above the mangers. In addition to this hay-loft church, Mr. Jay started a club for men in a cheese and bacon warehouse, the subscription to which was a penny a week. Here the men were allowed to smoke and sing, play cards, dominoes, or bagatelle, indulge in gymnastic exercises, or, with their fists enclosed in boxing-gloves, punch each other about to their heart's content. Even with these great temptations the men were not readily won over, but Mr. Jay has now gained the success which his energy and devotion deserve. He has at the present time on this Boundary-street area, beneath one roof, a church, a clubroom, a gymnasium, and a lodging-house. The church is, so to speak, a continuation of the stable loft, and the club-room an extension of the bacon warehouse. There are, practically, only three rules which govern the club life, and they are not very exacting. The fee is a penny a week ; members must be over 18 years of age, and live in the district. There are 500 members, and the average nightly attendance is 150. It will astonish many good folk to know that there are thieves and loafers among the patrons of the club. Mr. Jay, however, thinks that they are better in the club than elsewhere. The lodging-house is certified to accommodate 92 men, but Mr. Jay will not take more than 48. With this number the house pays its way and is not crowded. The fees are half-a-crown a week for the use of the kitchen and a cubicle, and two shillings for a bedroom with other lodgers and the common use of the kitchen. Besides this house, there is also a free shelter in the club-room, where a few selected out-of-works are allowed to sleep. 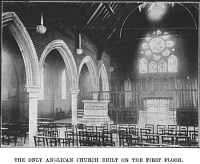 In church work Mr. Jay has been singularly successful. Every Sunday the church is crowded at all services, and over 1,800 communions were made during the year by the poor and ignorant parishioners. There are Sunday- schools with an aggregate of 1,000 scholars, who, twice on Sundays, pack the church to the doors. But Mr. Jay does not only feed the children spiritually, on Sunday mornings he gives some hundreds of them a free breakfast, and prevents, in this way, the poor mites from sitting hungrily through the school hours. Mothers' meetings are held on Tuesday and Thursday afternoons; there are about 600 members. At present Mr. Jay employs sisters from Kilburn, but when the new mission-house is built, at a cost of Ł5,000, there will be room for resident sisters. The building will also contain two large halls each seating 300 people, several smaller rooms for general purposes, and a bath-room where mothers can wash their children.

After nine years' work amongst the most desperate and depraved characters in London, Mr. Jay's opinions on the solution of the great social problem are full of interest. In an interview with Mr. Jay on this subject a representative of this journal asked:

"What do you think was the great cause of the degradation which used to exist here, Mr. Jay ?"

"There were, no doubt, several reasons, but it is my opinon that poverty was the chief. There is no temptation like that of poverty. It is the greatest that can fall in the way of any man or woman. It fills our prisons and turns honesty into crime and virtue into dishonor. But it must also be remembered that at the very outset of our social problem we are met by the incontrovertible fact that the major portion of the submerged and semi-criminal class are in their present position through physical, moral, and mental peculiarities. They have no nerve nutrition, no energy or staying power. Again, their natural gifts are small. Cunning, not wisdom ; sharpness, not intelligence, are stamped even on their faces. And yet all the time the well-to-do virtuous classes, walled off from temptation, surrounded by all that conduces to right living, wrap themselves in the wretched mantle of their detestable hypocrisy and pretend to believe that all in this life have equal chances, and must be uniformly fairly judged. But science in unmistakable accents teaches the reverse. It is easy to talk about laziness and lack of thrift, and to moralise over opportunities lost or power misapplied, but we forget that there is this large class which never had a fair chance of being quickened into life."

"But in what way do you think the problem can be solved ?"

"There is, it seems to me, only one solution to this problem. Education has failed, religious work cannot he expected to do what is needed, the Poor Law and prison systems are alike ineffective, and universal charity cannot rightly be considered a real factor in the case. The only method, I think, is to stop the supply of persons born to be lazy, immoral, and deficient in intellect. This can only be done by sending the present stock of them to what I will call a penal settlement. The submerged constitute a peculiar separate class, and yet people are so afraid of weakening individual responsibility that, though they may be forced to agree to these things, they persist in going on with the dreary old routine of injustice which we have inherited from our forefathers. We have with us a large, miserable, and costly class, which, by our own folly, increases daily. Are we merely to please ourselves and satisfy our own idle inherited theories - to go on treating them as exactly like everybody else ? The fact is, all men are not equal, nor can they be treated as such. This, through no fault of their own, I grant; but we can prevent them bringing into the world children stamped with the character of their parents."

"But what is the nature of the settlement you propose, Mr. Jay?" 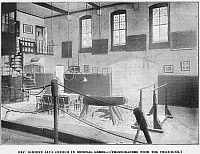 "It would be a settlement where the class I have spoken of should be kept for life. In many respects it would resemble a prison, only, of course, larger and far less gloomy. It should be possessed of all appliances for physical development and well-being, gardens, covered promenades, a gymnasium, and baths of all descriptions, recreation rooms, reading rooms, and even a theatre and concert room. The inmates should be treated as well as, say, the inmates of Hanwell. In such a place there would necessarily be the possibility of recourse to punishment, solitary confinement, or even an application of corporal punishment, but I think the inmates could be ruled without punishment. It is one thing to go to prison for a few years, and quite another to settle down in a penal settlement for life, especially as the latter would offer every incentive to good conduct. To the submerged temperament such a place would be the best home they had ever known, and in time it might be that poor creatures, acknowledging their own weakness, knowing the dreary bitterness of the past, would gladly, many of them, be put where they would lose some liberty, but gain a better and perhaps a happier life. The officers of the settlement would have to be chosen wisely and trained carefully. Human sympathy would be, perhaps, their most necessary qualification. No nobler surrender could be imagined than that which would bring those in easy and comfortable circumstances to look on it as an honor to serve in any capacity these the least of their brethren."

"How would you define what persons are suitable for inmates of this settlement, Mr. Jay?"

"It could, I think, be easily settled that any one convicted the second or third time, even for stealing, could be made the subject of a careful examination by a hoard of experts in criminal anthropology, both physical and psychical. Their unbiassed unanimous judgment on any given case would carry certain conviction to the mind of all thinking persons."

"But would there not be a great outcry against shutting human beings off from all contact with the outside world?"

"No doubt; but the public must be educated to the idea. But it can scarcely be rationally argued that society has a right to condemn criminal lunatics and others to life-long imprisonment, and yet possess no authority to act in a similar preventive manner as regards the semi-criminals of our everyday experience. There could of course be reformatories as well as penal settlements; but freedom is not licence, and it is, on the whole, a thousand times more humane to place persons who possess no power of guiding themselves where they can neither harm themselves nor other people. The new method sounds drastic and harsh, but it must be remembered that a virulent fever cannot be cured by doses of treacle. The time has come when something must be done : why not at least try this new method, which seems to promise and portends so much?"