In the thirty years since debunking the Duke of Clarence / Annie Crook theory, nothing has changed my mind about the events of autumn 1888. I firmly believe that the person known as Jack the Ripper committed murders 1, 2 and 4, and that Elizabeth Stride was a domestic look-alike murder.

I also believe that the events in Millers Court were part of something very different. Something that, almost 120 years later, we are only just beginning to unravel and understand.

The evidence that follows will not solve the Kelly murder. It actually poses more questions than it answers, but what I hope it will do is help serious Ripperologists reappraise the events of November 9th 1888.

In 1989 the photograph known as MJK 3 arrived anonymously at Scotland Yard. It shows the Kelly murder scene from the opposite side of the bed as shown in photograph MJK 1 and, despite the fact that it lacked any provenance, since its arrival on the scene we have been satisfied to accept it as such. Until now.

The photograph MJK 3 warrants close inspection, for it is a treasure trove of information about what actually happened in Room 13 Millers Court.

Contemporary illustrations and floor plans suggest that Kelly’s room was fairly spacious. In fact, Room 13 was cramped: 12.0’ from door to fireplace, and 10.0’ from windows to partition wall. The 120 sq. ft. space was dominated by a bed, and also contained two tables, a chair and a wash-stand. 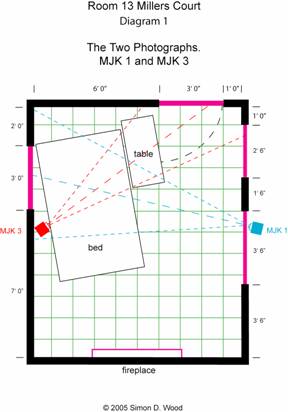 Diagram No. 1 is a scale plan of Room 13. It is impossible to be exact in the dimensions, but I believe the drawing to be sufficiently accurate for the matter in hand. I researched the size of Victorian bricks (in 1840, the Imperial brick of a nominal size of 9.0 x 4.5 x 3.0 inches was widely adopted), averaged the width of the two doors at 3.0 ft and took an educated guess at the width of the windows based on calculations from the exterior photograph of Room 13. For convenience, I have centered the fireplace and mantelpiece on the end wall.

What the camera shows us in MJK 1 and MJK 3 largely dictated the size of the bed and table on the plan. The bed is 6’ 6” long by 4’ 0” wide (based on occasional double occupancy), and the bedside table 3’ 0” by 1’ 6”. I have tilted the bed 10° away from the partition wall in keeping with its apparent position in MJK 1. This gives a gap of about 11 inches where bedding is rolled up and stuffed between the bed and the wall (and also the camera location for MJK 3). Also marked on this drawing are the relative positions of the camera for the two photographs, together with their angles of view and centre lines.

At first glance it is possible to believe that both photographs were taken with the bed in this position.

However, there are a number of inconsistencies in photograph MJK 3.

Let us start with Mary Kelly’s right leg in the foreground of the photograph, seen from her knee to the top of her ankle, a length of about fifteen inches (my wife of roughly the same height as MJK kindly volunteered her leg for this measurement).

With the camera in the position shown in Diagram 1, how did the photographer manage to capture MJK’s right leg, which would have been close up against the lens? In order to capture it, together with all the background detail, the camera would have to have moved at least a foot further back, but unfortunately that would have put it on the other side of the partition wall.

The explanation for this is that, if you look closely, you’ll see that MJK’s right leg has been painted in, together with a crudely drawn hand touching something that looks suspiciously like the back of an old camera.

My first thought was that, as the leg was impossible to capture from this position, it was painted in later to give the photograph more context. However, I ditched this notion when MJK 3 gave up some more of its secrets.

Let us turn our attention to the strip of light, purportedly coming through the partially open door to Room 13. 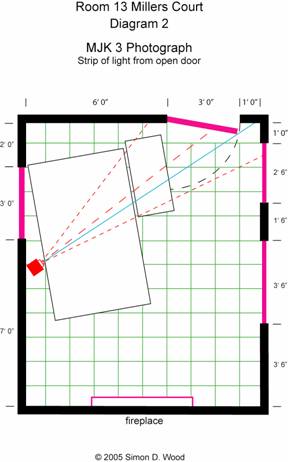 Diagram No. 2 is the same drawing, but shown with the door 4 inches ajar. From this drawing you will see that the camera that took MJK 3 would not have been able to see a strip of light between the partially open door and the door frame. If the door was ajar (it opened inwards), all the camera would have seen would have been the leading edge of the door, with daylight behind it illuminating the right hand vertical of the door frame and the section of wall by the smaller of the room’s two windows. But that corner of the room is almost in complete darkness.

Therefore, it is my contention that in MJK 3 the door to Room 13 is closed.

So, what accounts for the strip of light?

We’ll return to that later.

If you look closely at a scan of MJK 3 (I used the copy from this website and tweaked it in Adobe Photoshop) you will see an upright wooden chair sitting at an angle across the corner of the room between the door and the smaller of the two windows. 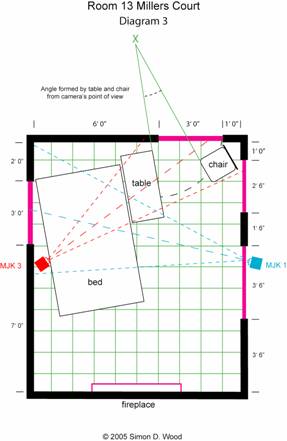 Diagram No. 3 shows the chair in place relative to the bed and table. I made the chair 16 inches square, although its actual size is quite immaterial, as is its position along a line extending in a straight line from the corner towards the camera. What’s really important is the angle the chair forms with the table and the bed. Note how, from the position of the bed as shown in MJK 1, this angle converges towards the door.

The angle formed by the table and chair converges in the opposite direction.

All of which means that the bed and table were in a different position from that in MJK 1 when photograph MJK 3 was taken.

So where were the bed and table? 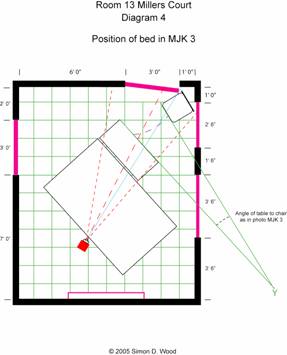 Diagram No. 4 shows the position of the bed in MJK 3, almost diagonally across the room, with the camera position and field of view marked in red. Again, it is impossible to be absolutely accurate, but this position satisfies all the detail seen in MJK 3. I have left the door ajar to show that my earlier argument about the door still holds good. Even from this angle, a strip of light from a partially open door would not be visible to the camera.

For further proof about the position of the bed and table, look again at MJK 3. If this photo had been taken with the bed in the position shown in MJK 1 the door would appear at a fairly acute angle (somewhere around 35°). In MJK 3 the door appears more square on (I make it around 66°).

Let us return to the strip of light.

If the door was closed, what could account for it?

The answer is, that it’s not a strip of light. Tweaking in Photoshop revealed it to be in a different plane to the door (i.e. nearer the camera), and I believe it to be something dangling from the ceiling that has been caught in the bright light source (just visible) coming from the right of the photo (more on this later). I have no knowledge of the working parts of the human body, but would suggest that it is something internal. Notice how it is slightly bulbous at its base and appears stretched in places as though sagging on its own weight.

So, let us recap.

In MJK 3 the door to Room 13 is closed. A chair stands in the corner preventing the door from opening easily. The bed and table are in the middle of the room, and something grisly is dangling from the ceiling. All of which is illuminated by a light source emanating from the right of the photo.

It would be reasonable to suggest that the curtains on the larger of the room’s two windows had been opened and that the light source was sunlight. The only problem with this, though, is that in the middle of the morning of November 9th 1888 (when MJK 3 is supposed to have been taken), the sun was towards the south (Mary Kelly’s windows looked north) and cloud cover was at 100%. Hardly sufficient illumination to create the hot spots of light seen on (a) the items on the table, (b) Kelly’s knee, hand and pelvic region, (c) the thing dangling from the ceiling, and also account for the shaft of bright light cutting across the top left hand corner of the picture.

So there you have it.  Now you know as much as I do. I don’t know the answers, but do realize that the opportunities for speculation these questions open up are enormous. The only thing I will add (and this is a strong hunch) is that I believe the person who anonymously mailed MJK 3 to Scotland Yard in 1989 is in possession of the other MJK photographs. Oh, and just in case you were wondering, it’s not me. If it was, by now I’d have signed the biggest book and movie tie-in deal in history.

The photographic questions that need to be addressed are:

3. What is the light source?

4. With the bed in the middle of the room when MJK 3 was taken, why didn’t the photographer simply step back a foot or two to capture the full detail of MJK’s body? Why go to all the bother of painting in the leg?

But the biggest questions of all are:

5. Who moved the bed back into the position shown in MJK 1?

6. Why has the world been led to believe that Mary Kelly was murdered with the bed in the position shown in MJK 1?

In the meantime all I can do is offer to answer any serious questions or misgivings you may have regarding my investigations.

Study the evidence. Prove me wrong. I won’t be offended.