Regarding the provenance of the original prints of the famous photographs of the murder scene at 13 Miller's Court, 26 Dorset Street, Spitalfields, two relevant references have been written. They are as follows --

Several years ago, through the permission of the Commissioner of the City Police, I was able to place in the Eddowes and Kelly file [at New Scotland Yard] copies of the original photographs which were in their possession and to deposit similar sets with the Black Museum and Bow Street Historical Museum. One can only assume that the Kelly photograph was removed from the file at a much earlier date, since Sir Melville Macnaghten refers to it in his notes. Stranger still was the fact that the photograph was the work of the City Police, in spite of the dressing down they had received from Sir Charles Warren for being in Whitechapel. A story which explains this, although it is at variance with the newspaper accounts, is that although the Metropolitan Police didn't dare to disobey Warren's order and break down Kelly's doorway before the bloodhounds arrived, the City Police did so as they ran no such risks. Apparently as the morning dragged on, and nothing happened in Miller's Court, somebody quietly asked the City Police for their help which they gave by breaking into Kelly's room and taking the photograph of her body as their only justification for doing so. Certainly all the surviving photographs of Ripper victims were taken by the City of London Police. Curiously enough, they may have taken others. The photograph of Miller's Court is now a well-known one, but it was only by chance that I found it and published it in Police Journal in 1969. In 1967 the City Police photographic department were clearing out a lot of old negatives, including some glass ones, and by chance I happened to spot them. Two were of immediate interest. One was of some Metropolitan policemen, taken about 1870, and the other - which I instantly recognized - was of Miller's Court, of which no photograph was known to exist. When I tried to trace their source, I was told that they had come from a large album of photographs which disappeared when the force museum was broken up in 1959 and lost at the same time as the 'From Hell' letter, which vanished with it. I don't believe that they have been lost forever. But their present whereabouts is still a mystery.

In 1988, on the centenary of the Ripper murders, I received an envelope which contained papers from the Ripper files that had not been seen for many years, including the original 'Dear Boss' letter. They were sent from Croyden, and the envelope was tested for fingerprints. After eliminating the prints of those who had handled it, one set was found of which there was no trace. Who sent them has never been discovered. I also found other interesting material relating to the Ripper. While going through some old photograph albums that had been used for CID training, I found pictures of the five victims. The scramble to release them to the press was one of the most remarkable experiences of my forty years with the Metropolitan Police.

... Also shown publicly for the first time yesterday were original post mortem photographs of three of the Ripper's victims which had been presumed lost. They were returned to Scotland Yard separately [from the 'Dear Boss' letter, Bond report, Crippen items etc.] by the family of a senior police officer who died recently.

It is not known how the photographs came into his possession but he is believed to have used them to illustrate criminology lectures.

IF NOTHING else, at least one more piece has been added to the jigsaw. John Dellow, deputy commissioner of the Metropolitan Police, said yesterday at the unveiling of the previously lost papers and photographs from the Jack the Ripper murders.

Of all unsolved murders, it is the file that remains open. The interest it attracts is shown by the American tourists, mainly women, who take "Tragical History Tours" around Whitechapel, and the attendance at yesterday's press conference.

The fact that the material has turned up in the centenary year and that some of it is of mysterious origin is yet another puzzle for the Ripperologists...

But Scotland Yard was presenting an interesting historical artefact, rather than a belated operational development.

Mr. Dellow, chairman of the Force Historical Society, said: "I don't think it brings us any closer to solving the mystery. The new mystery for us is where the documents came from - an dwe are no nearer solving that."

The photographs are from the collection of a recently deceased former police officer and they were handed to Scotland Yard by his family. His name is not being disclosed.

Bill Waddell, curator of the Black Museum at Scotland Yard, said five were new to contemporary criminologists. "It is the first time we have seen these three faces," he said. they show Mary Ann Nicholls [sic], the first victim on August 31, 1888, with her throat slashed; Elizabeth Stride, on a mortuary slab; and Annie Chapman in her coffin.

Mary Jeanette Kelly, the last victim, in November 1888, is pictured twice on the bed where she was mutilated and disembowelled.

Similar pictures are in the Black Museum, but taken from a different angle. The sixth, already known to criminologists, shows Catherine Eddowes, slashed and disembowelled...

Anyone considering further research with the new material will have to wait until it reaches the records office. The photographs will go to the Black Museum.

The famous photograph of the body of Mary Kelly, full length, lying on the bed is thus known to exist in the form of two separate original prints, as described above. They are easily identifiable from each other and may be described as follows:-

These two photographs, copies of both of which have appeared in many books on 'Jack the Ripper,' are identified as follows:-

Photograph No. 1 - CLP/MJK 1 - [Located in the City of London Police photographic department in 1967 by Donald Rumbelow]  Has a tear at the bottom centre and a 'light spot' just to the left of the apparent letter 'M' above the body. There are also two pin-holes at the top centre. It is understood that Don Rumbelow passed this original to the Black Museum and that it is still there. 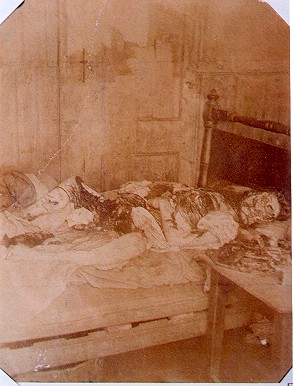 Photograph No. 2 - NSY/MJK2 - [Found in the album returned to New Scotland Yard in 1988]  Lacks the aforementioned blemishes to CLP/MJK1, and has a pin at top left corner, and corner fixing marks at both right corners. It also appears to be a paler sepia colour. Around 1993 it sustained a crack which runs across the top left of the photograph, just missing Kelly's foot. This original print is now held at the Public Record Office, Kew, Reference MEPO 3/3155. The crack damage was sustained before the page was microfilmed. [NB the same file page contains the photographs of Nichols, Chapman, Eddowes standing against the wall, and the second Kelly photograph taken from the opposite side of the bed - ref. NSY/MJK3]. This photograph usually appears paler and less 'contrasty' than Photograph No. 1.

Having recorded the provenance and description of the Kelly photographs it is interesting to note their use in Ripper related books:-

As may be seen, the majority of the books use the photograph located by Don Rumbelow, in many cases poor copies of it, usually as close-ups. However, the New Scotland Yard copy of the photograph, located in 1988, has gradually come into circulation.

On May 29, 1998 I questioned Don regarding the photograph. He stated that no negative was found, only the photograph. This, he said, he had copied and then placed the original with the Black Museum. Don has a first generation copy from this negative, and passed one to Professor Francis Camps at the London Hospital also. He has no spare copies of the Police Journal in which, in 1969, he first published the photograph. The importance of Don's actions, and his foresight in preserving these items back in the 1960's cannot be overemphasized.

The copy used by Lacassagne, not known if still in existence, has already been mentioned. Another copy was in the possession of Dr. Percy J. Clark, Dr. Bagster Phillips' assistant, in 1910. A fifth copy was amongst the documents, including the Littlechild letter, purchased by antiquarian dealer Eric Barton from Sotheby's in the early 1960's. These documents were the remains of the criminological collection of George R. Sims, and it was presumably given to Sims, with other Miller's Court photographs, by Sir Melville Macnaghten, his close friend. In his 1907 article in Lloyd's Weekly News Sims refers to these photographs being in his collection. Eric told me, 1993, that he had never sold the photographs and that to the best of his knowledge they were still somewhere amongst his collection at Sheen Road, Richmond. They were never located before Eric died.