On the corner of Commercial Street and Fournier Street in Spitalfields stands perhaps the most famous pub in Ripper history. The Ten Bells Pub has been standing since at least 1752 (Begg, Fido & Skinner, 1996). The pub has undergone one name change. From 1976 to 1988, it was known as "The Jack the Ripper". Since 1988 it was given its original name of "The Ten Bells".

Although the exterior of the building has been rebuilt (Begg et al, 1996), the interior remains much the same as it did since the days of Jack the Ripper. As you enter the Ten Bells, you are indeed stepping back in time to the days of the Autumn of Terror. The back wall of the pub has a beautiful tile picture "Spitalfields in the Olden Time". This must be seen in person to really appreciate. The color photo doesn't do it justice.

On the wall opposite the bar is a giant sign listing the victims of Jack the Ripper. Although it is generally accepted by most ripperologists that Jack the Ripper murdered only 5 victims, the large sign shows six, with Martha Tabram being named first. This was based on the theory that the murders were based on black magic. Five mutilated victims were needed for the black magic theory to work. Elizabeth Stride was not mutilated. Her throat was cut. The theorist therefore, had to go back in time to find another victim that was mutilated in order for the theory to work. Since Martha Tabram (aka Turner) was stabbed 39 times, he counted this murder as a mutilation. Thus Martha Tabram now becomes the first victim on the giant Jack the Ripper board at the Ten Bells. The remainder of the wall displays interesting newspaper clippings about Jack the Ripper as well as possible suspects and theories.

Which victims of Jack the Ripper patronized the Ten Bells pub during the Autumn of Terror in 1888? To answer this question, we must review the Ripper literature. Then I will present my theory regarding the victims and the Ten Bells. Begg, Fido & Skinner (1996) state that "It was widely rumoured that Annie Chapman had been seen in a pub near Spitalfields Market at c.5.00 A.M. on the morning of her murder" (p. 447). The pub was reportedly the Ten Bells, as the pub is directly across the street from the Spitalfields Market. Elizabeth Foster told newspaper reporters that she was with Mary Kelly drinking in the Ten Bells during the evening hours on November 8, 1888. Mary Kelly used to stand outside the Ten Bells in order to attract customers. In fact Tom Cullen, author of The Autumn of Terror , interviewed a retired market porter named Dennis Barrett. As a boy, he knew Mary Kelly by sight. She also went by the name of "Black Mary". Barrett stated "she had her pitch outside the Ten Bells Pub in Commercial Street, and woe to any woman who tried to poach her territory. Such a woman was likely to have her hair pulled out in fistfuls." So when you stand outside the entrance to the Ten Bells Pub, you are truly standing in the footsteps of perhaps the most famous of the Ripper's victims, Mary Kelly!

While the Ripper literature shows that two victims visited the Ten Bells before they were murdered, I believe that most of the victims patronized the Ten Bells, as well as other pubs in the area for customers. I will be presenting my theory in an upcoming essay on the Casebook entitled The Pubs and Jack the Ripper.

More information on the pub... 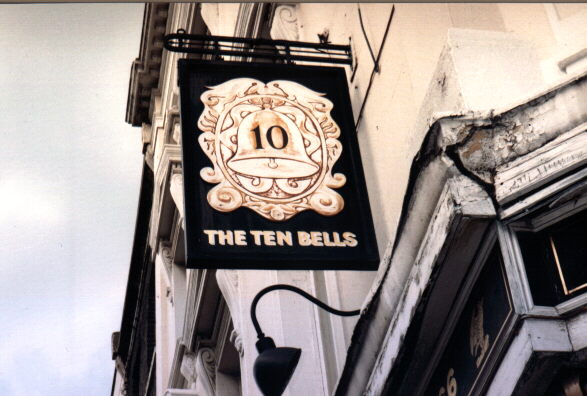 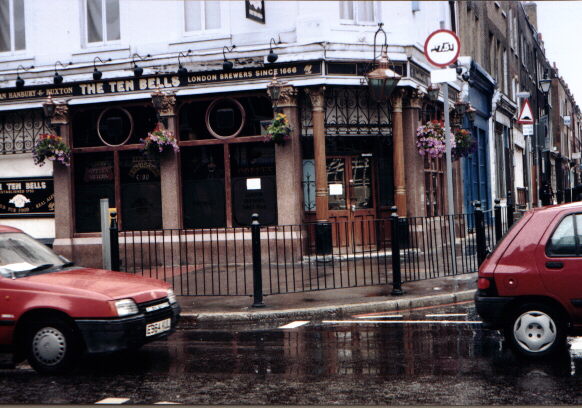 The Ten Bells, from Commercial Street. Christ Church is adjacent to the pub. 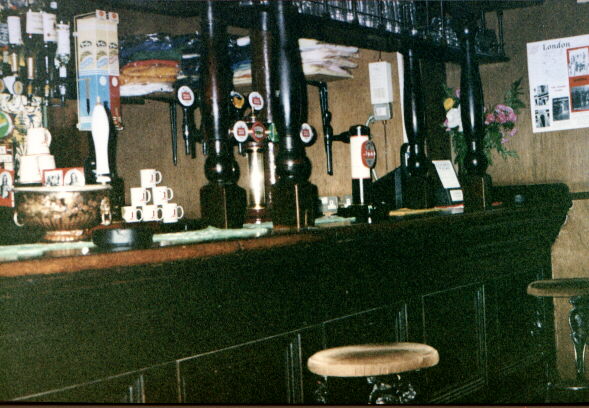 The bar of the Ten Bells, changed significantly since 1888. 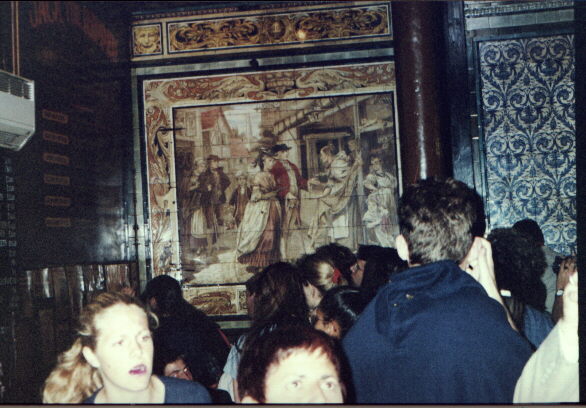 This photo shows a crowd at the pub after a Jack the Ripper walk. On the far left is the "victim's board"; in the middle is an original 19th century mosaic, "Spitalfields in the Olden Time -- Visiting a Weaver's Shop". 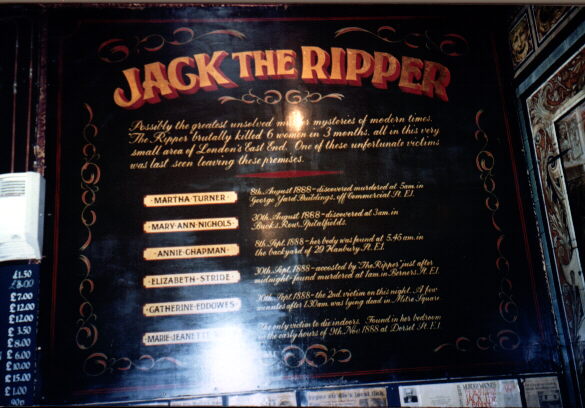 The giant "victims' board" at the Ten Bells.